The Song of the Lark (The Great Plains Trilogy) 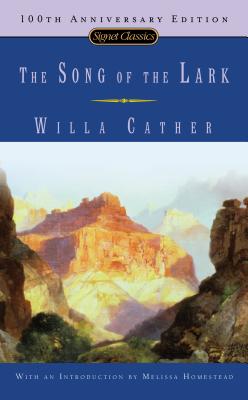 The Song of the Lark (The Great Plains Trilogy)

“Miss Cather, indeed, here steps definitely into the small class of American novelists who are seriously to be reckoned with.”—H. L. Mencken

“To reread Cather is to rediscover an arresting chapter in the national past.”—Los Angeles Times

Feisty Thea Kronborg, with her rapturous singing voice, is headed for great things. But her upbringing in a raw, provincial Colorado town has practically stifled her artistic ambitions. Only a few people in Moonstone recognize Thea’s world-class talent. One of them is Ray Kennedy, who, entranced by Thea’s voice, hopes to marry her, but is destined to unchain her. Sustained by determination and a pioneer’s spirit, and inspired by the Native American culture that surrounded her in youth, Thea makes her way in the world. But with loneliness as her constant companion, she comes to realize what sacrifices a true artist must make.…

With an Introduction by Melissa Homestead

Born in Virginia, Willa Cather (1873–1948) moved with her family to Nebraska before she was ten. She graduated from the University of Nebraska in 1895, then taught high school and worked for the Pittsburgh Leader before being appointed associate editor of McClure’s Magazine. Cather published her first novel, Alexander’s Bridge, in 1912. In O Pioneers! (1913), she turned to her greatest subject, immigrant life on the Nebraska prairies, and established herself as a major American novelist. O Pioneers! was followed by other novels, including My Ántonia (1918), The Professor’s House (1922), and Death Comes for the Archbishop (1927).

Melissa Homestead is the Susan J. Rosowski Professor of English at the University of Nebraska–Lincoln. She is the author of American Women Authors and Literary Property, 1822–1869, and with Guy Reynolds is coeditor of Willa Cather and Modern Cultures.