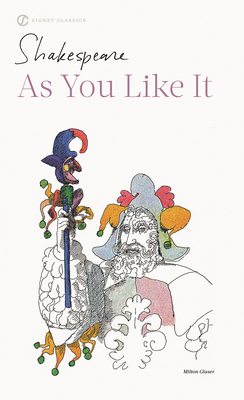 By  William Shakespeare , Editor  Albert Gilman
Mass Market
$ 4.95
Out of Stock In Store (Click to Order)

The Signet Classics edition of William Shakespeare's comedic play about two enduring human illusions—the dream of a simple life and the ideal of romantic love.

Banished from her uncle's court, young princess Rosalind disguises herself as a farmer and encounters a memorable cast of characters—including her love Orlando—in the Forest of Arden in this witty, subversive comedy.

This revised Signet Classics edition includes unique features such as:

• An overview of Shakespeare's life, world, and theater
• A special introduction to the play by the editor, Albert Gilman
• Selections from Thomas Lodge's Rosalynd, the source from which Shakespeare derived As You Like It
• Dramatic criticism from Arthur Colby Sprague, Helen Gardener, and others
• A comprehensive stage and screen history of notable actors, directors, and productions
• Text, notes, and commentaries printed in the clearest, most readable text
• And more...

William Shakespeare (1564–1616) was a poet, playwright, and actor who is widely regarded as one of the most influential writers in the history of the English language. Often referred to as the Bard of Avon, Shakespeare's vast body of work includes comedic, tragic, and historical plays; poems; and 154 sonnets. His dramatic works have been translated into every major language and are performed more often than those of any other playwright.