When We Left Cuba 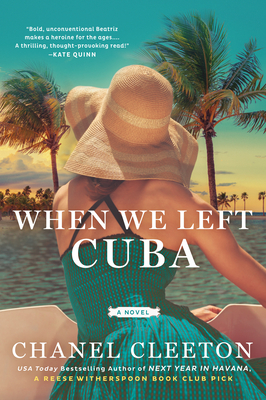 When We Left Cuba

By  Chanel Cleeton
Paperback
$ 17.00
Out of Stock In Store (Available to Order)

In 1960s Florida, a young Cuban exile will risk her life—and heart—to take back her country in this exhilarating historical novel from the author of The Last Train to Key West and Next Year in Havana, a Reese Witherspoon Book Club pick.

The Cuban Revolution took everything from sugar heiress Beatriz Perez—her family, her people, her country. Recruited by the CIA to infiltrate Fidel Castro's inner circle and pulled into the dangerous world of espionage, Beatriz is consumed by her quest for revenge and her desire to reclaim the life she lost.

As the Cold War swells like a hurricane over the shores of the Florida Strait, Beatriz is caught between the clash of Cuban American politics and the perils of a forbidden affair with a powerful man driven by ambitions of his own. When the ever-changing tides of history threaten everything she has fought for, she must make a choice between her past and future—but the wrong move could cost Beatriz everything—not just the island she loves, but also the man who has stolen her heart...

Chanel Cleeton is the New York Times and USA Today bestselling author of The Last Train to Key West, When We Left Cuba, and the Reese Witherspoon Book Club pick Next Year in Havana. Originally from Florida, she grew up on stories of her family's exodus from Cuba following the events of the Cuban Revolution. Her passion for politics and history continued during her years spent studying in England where she earned a bachelor's degree in international relations from Richmond, the American International University in London, and a master's degree in global politics from the London School of Economics and Political Science. Chanel also received her Juris Doctor from the University of South Carolina School of Law. She loves to travel and has lived in the Caribbean, Europe, and Asia.