Where the Light Enters 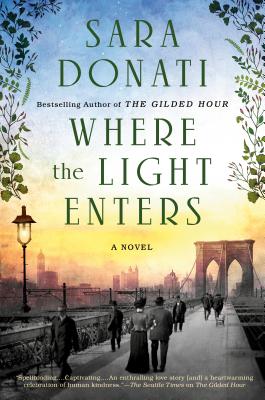 Where the Light Enters

Obstetrician Dr. Sophie Savard returns home to the achingly familiar rhythms of Manhattan in the early spring of 1884 to rebuild her life after the death of her husband. With the help of Dr. Anna Savard, her dearest friend, cousin, and fellow physician she plans to continue her work aiding the disadvantaged women society would rather forget.

As Sophie sets out to construct a new life for herself, Anna's husband, Detective-Sergeant Jack Mezzanotte calls on them both to consult on two new cases: the wife of a prominent banker has disappeared into thin air, and the corpse of a young woman is found with baffling wounds that suggest a killer is on the loose.  In New York it seems that the advancement of women has brought out the worst in some men. Unable to ignore the plight of New York's less fortunate, these intrepid cousins draw on all resources to protect their patients.

Sara Donati is the international bestselling author of the Wilderness series, which includes Into the Wilderness, Dawn on a Distant Shore, Lake in the Clouds, Fire Along the Sky, Queen of Swords, and The Endless Forest.