My Mexico City Kitchen: Recipes and Convictions [A Cookbook] 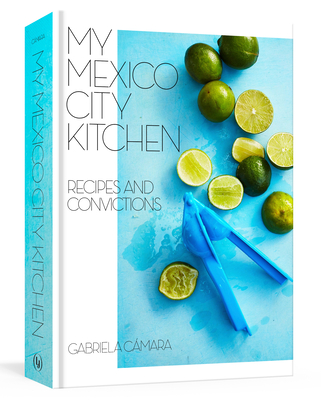 My Mexico City Kitchen: Recipes and Convictions [A Cookbook]

The innovative chef and culinary trend-setter named one of Time’s 100 most influential people in the world shares 150 recipes for her vibrant, simple, and sophisticated contemporary Mexican cooking.

Inspired by the flavors, ingredients, and flair of culinary and cultural hotspot Mexico City, Gabriela Cámara's style of fresh-first, vegetable-forward, legume-loving, and seafood-centric Mexican cooking is a siren call to home cooks who crave authentic, on-trend recipes they can make with confidence and regularity. With 150 recipes for Basicos (basics), Desayunos (breakfasts), Primeros (starters), Platos Fuertos (mains), and Postres (sweets), Mexican food-lovers will find all the dishes they want to cook—from Chilaquiles Verdes to Chiles Rellenos and Flan de Cajeta—and will discover many sure-to-be favorites, such as her signature tuna tostadas. More than 150 arresting images capture the rich culture that infuses Cámara's food and a dozen essays detail the principles that distinguish her cooking, from why non-GMO corn matters to how everything can be a taco.

With celebrated restaurants in Mexico City and San Francisco, Cámara is the most internationally recognized figure in Mexican cuisine, and her innovative, simple Mexican food is exactly what home cooks want to cook.

Gabriela Cámara is the chef-owner of Mexico City's most famous and trafficked restaurant, Contramar, and its sister restaurant, Cala, in San Francisco. Mentored by Diana Kennedy, Cámara has become internationally recognized as the leader of accessible yet sophisticated Mexican cooking. She has appeared in every major American newspaper and food magazine. In 2016, Cala was named one of Bon Appétit's 50 Best New Restaurants, Food & Wine's Restaurant of the Year, and a semifinalist for the James Beard Foundation's award for Best New Restaurant. In 2020, Time magazine named her one of the 100 most influential people in the world.

Malena Watrous has worked as a recipe tester for Melissa Clark and written about food, books, and travel for the New York Times, Allure, Condé Nast Traveler and Salon. The author of the novel If You Follow Me, she leads the Online Writer's Studio at Stanford University, where she teaches fiction and food writing.