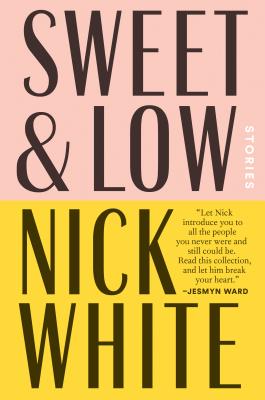 NAMED ONE OF THE MOST ANTICIPATED BOOKS OF SUMMER 2018 BY O Magazine, Entertainment Weekly, New York Post, The Millions, Southern Living, POPSUGAR, The Wall Street Journal, Chicago Review of Books

Praised by the Washington Post as "Tennessee Williams . . . transposed to the twenty-first-century South," Nick White returns with a stunning short-story collection that tackles issues of masculinity, identity, and place, with a sharp eye for social commentary and a singular handling of character.

At first glance, the stories in Sweet and Low seem grounded in the everyday: they paint pictures of idyllic Southern landscapes, characters fulfilling their roles as students, wives, boyfriends, sons. But they are not what they seem. In these stories, Nick White deconstructs the core qualities of Southern fiction, exposing deeply flawed and fascinating characters--promiscuous academics, aging podcasters, woodpecker assassins, and lawnmower enthusiasts, among others--all on wildly compelling quests. From finding an elusive bear to locating a prized timepiece to making love on the grave of an iconic writer, each story is a thrilling adventure with unexpected turns. White's honest and provocative prose will jolt readers awake with its urgency.

Nick White is the author of the novel How to Survive a Summer. His fiction and essays have appeared in The Kenyon Review, Guernica, The Literary Review, LitHub, and elsewhere. He teaches creative writing at The Ohio State University.