The Morning Star: A Novel 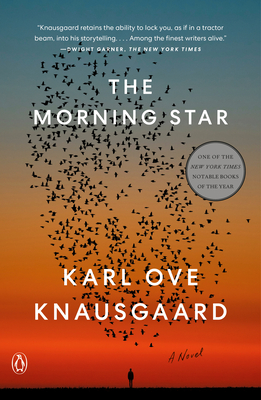 The Morning Star: A Novel

By  Karl Ove Knausgaard , Translated by  Martin Aitken
Paperback
$ 19.00
Likely On Our Shelves

The international bestseller from the author of the renowned My Struggle series, The Morning Star is an astonishing, ambitious, and rich novel about what we don't understand, and our attempts to make sense of our world nonetheless

One long night in August, Arne and Tove are staying with their children in their summer house in southern Norway. Their friend Egil has his own place nearby. Kathrine, a priest, is flying home from a Bible seminar, questioning her marriage. Journalist Jostein is out drinking for the night, while his wife, Turid, a nurse at a psychiatric care unit, is on a night shift when one of her patients escapes.

Above them all, a huge star suddenly appears blazing in the sky. It brings with it a mysterious sense of foreboding.

Strange things start to happen as nine lives come together under the star. Hundreds of crabs amass on the road as Arne drives at night; Jostein receives a call about a death metal band found brutally murdered in a Satanic ritual; Kathrine conducts a funeral service for a man she met at the airport – but is he actually dead?

The Morning Star is about life in all its mundanity and drama, the strangeness that permeates our world, and the darkness in us all. Karl Ove Knausgaard’s astonishing new novel, his first after the My Struggle cycle, goes to the utmost limits of freedom and chaos, to what happens when forces beyond our comprehension are unleashed and the realms of the living and the dead collide.

KARL OVE KNAUSGAARD's first novel, Out of the World, was the first ever debut novel to win The Norwegian Critics' Prize and his second, A Time to Every Purpose Under Heaven, was widely acclaimed. A Death in the Family, the first of the My Struggle cycle of novels, was awarded the prestigious Brage Award. The My Struggle cycle has been heralded as a masterpiece wherever it appears.