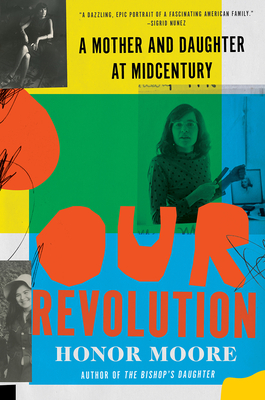 A daughter’s “tender and unflinching portrait of her complex, privileged, wildly talented mother” (Louise Erdrich) evolves beautifully into a narrative of the far-reaching changes in women’s lives in the twentieth century.

With the sweep of an epic novel, Our Revolution follows charismatic and brilliant Jenny Moore, whose life changed as she became engaged in movements for peace and social justice. Decades after Jenny’s early death, acclaimed poet and memoirist Honor Moore forges a new relationship with the seeker and truth teller she finds in her mother’s writing. Our Revolution is a daughter’s vivid, absorbing account of the mother who shaped her life as an artist and a woman, “beautifully recorded, documented, and envisioned as feminist art and American history” (Margo Jefferson).

Honor Moore is the author of two previous memoirs in A Daughter’s Family Trilogy—The Bishop’s Daughter, a finalist for the National Book Critics Circle Award, and The White Blackbird, a New York Times Notable Book—as well as a play and three collections of poems. She lives in New York City.