My Favorite Pets: by Gus W. for Ms. Smolinski's Class 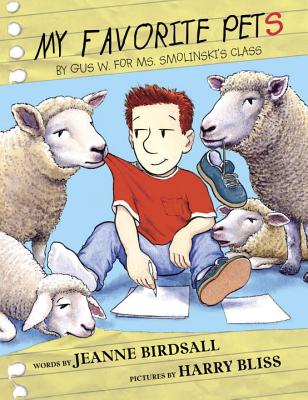 My Favorite Pets: by Gus W. for Ms. Smolinski's Class

When Jeanne Birdsall was young, she promised herself she'd be a writer someday--so that she could write books for children to discover and enjoy, just as she did at her local library. She is also the author of The Penderwicks, which won the National Book Award for Young People's Literature, The Penderwicks on Gardam Street, The Penderwicks at Point Mouette, and The Penderwicks in Spring.
Jeanne lives in Northampton, Massachusetts, with her husband and an assortment of animals, including a dog named Cagney. You can find out more about Jeanne, her books, and her animal friends at JeanneBirdsall.com.


Harry Bliss is a cartoonist and cover artist for the New Yorker magazine. He grew up in upstate New York amidst a family of successful painters and illustrators, and is also the illustrator of A Fine, Fine School by Newbery-Award winner Sharon Creech and Diary of a Worm and Diary of a Spider by Doreen Cronin; among many others. Harry lives in South Burlington, Vermont. Learn more about Harry and his work at HarryBliss.com.