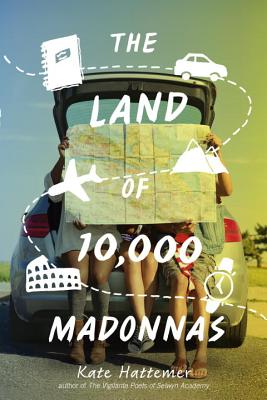 Which would you choose: a long, quiet life, or a short, heroic one?

Jesse Serrano has always been drawn to this question, but he’s never really had a choice. He’s known since birth that a hole in his heart would render his life a short one, whether he likes it or not.

As his dying wish, Jesse sends his cousins, best friend, and girlfriend on a trip across Europe—a mysterious mission that seems more harebrained with every leg of the journey. Following Jesse’s vague instructions, they trek across the continent, unsure if they should be basking in a backpacking trip before heading off to college or searching for something deeper. Through the museums, ancient ruins, landmarks, and more religious iconography than could fill a Holy Ark, they begin to wonder if they’ll ever be able to complete the passage that Jesse laid out for them—and if they even want to without him along for the ride.

In turns hilarious and heartbreaking, Kate Hattemer chronicles an unforgettable journey of lost and found, laughter and tears, and a myriad of Madonnas.

“Hattemer’s vivid third-person narrative and occasional excerpts from Jesse’s journal create a layered story of big questions and intense relationships . . . making for a moving read for readers of all ages.” —Publishers Weekly

Kate Hattemer graduated with a degree from Yale in classics. She works as a bookseller in Cincinnati and is the author of The Vigilante Poets of Selwyn Academy, which has received five starred reviews. Learn more about Kate on the Web at KateHattemer.com.