Spinster: Making a Life of One's Own 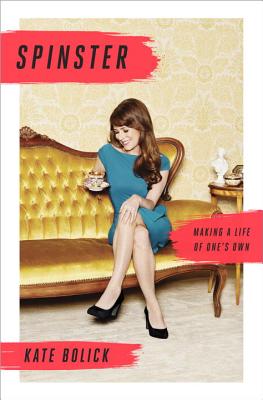 Spinster: Making a Life of One's Own

"Whom to marry, and when will it happen--these two questions define every woman's existence." So begins Spinster, a revelatory and slyly erudite look at the pleasures and possibilities of remaining single. Using her own experiences as a starting point, journalist and cultural critic Kate Bolick invites us into her carefully considered, passionately lived life, weaving together the past and present to examine why- she--along with over 100 million American women, whose ranks keep growing--remains unmarried. This unprecedented demographic shift, Bolick explains, is the logical outcome of hundreds of years of change that has neither been fully understood, nor appreciated. Spinster introduces a cast of pioneering women from the last century whose genius, tenacity, and flair for drama have emboldened Bolick to fashion her life on her own terms: columnist Neith Boyce, essayist Maeve Brennan, social visionary Charlotte Perkins Gilman, poet Edna St. Vincent Millay, and novelist Edith Wharton. By animating their unconventional ideas and choices, Bolick shows us that contemporary debates about settling down, and having it all, are timeless--the crucible upon which all thoughtful women have tried for centuries to forge a good life. Intellectually substantial and deeply personal, Spinster is both an unreservedly inquisitive memoir and a broader cultural exploration that asks us to acknowledge the opportunities within ourselves to live authentically. Bolick offers us a way back into our own lives--a chance to see those splendid years when we were young and unencumbered, or middle-aged and finally left to our own devices, for what they really are: unbounded and our own to savor.

Kate Bolick is a contributing editor to The Atlantic. She was previously the executive editor of Domino magazine. She lives in New York.