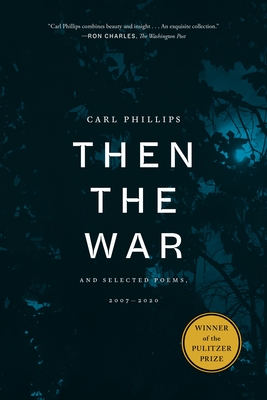 By  Carl Phillips
Hardcover
$ 35.00
Likely On Our Shelves

A new collection of poems from one of America’s most essential, celebrated, and enduring poets, Carl Phillips's Then the War

I’m a song, changing. I’m a light
rain falling through a vast

darkness toward a different
darkness.

Carl Phillips has aptly described his work as an “ongoing quest”; Then the War is the next step in that meaningful process of self-discovery for both the poet and his reader. The new poems, written in a time of rising racial conflict in the United States, with its attendant violence and uncertainty, find Phillips entering deeper into the landscape he has made his own: a forest of intimacy, queerness, and moral inquiry, where the farther we go, the more difficult it is to remember why or where we started.

Then the War includes a generous selection of Phillips’s work from the previous thirteen years, as well as his recent lyric prose memoir, “Among the Trees,” and his chapbook, Star Map with Action Figures.

Ultimately, Phillips refuses pessimism, arguing for tenderness and human connection as profound forces for revolution and conjuring a spell against indifference and the easy escapes of nostalgia. Then the War is luminous testimony to the power of self-reckoning and to Carl Phillips as an ever-changing, necessary voice in contemporary poetry.

Carl Phillips is the author of several books of poetry, including Silverchest, a finalist for the International Griffin Prize, and Double Shadow, winner of the Los Angeles Times Book Prize. He is also the author of The Art of Daring: Risk, Restlessness, Imagination. Phillips teaches at Washington University in St. Louis.