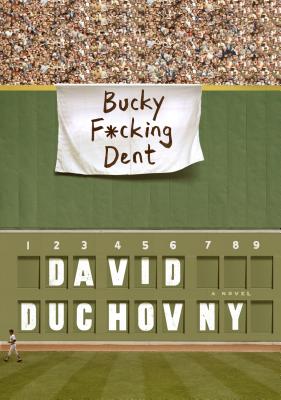 By David Duchovny
Not Available
Out of Print

The New York Times bestselling author David Duchovny is back

Ted Fullilove, aka Mr. Peanut, is not like other Ivy League grads. He shares an apartment with Goldberg, his beloved battery-operated fish, sleeps on a bed littered with yellow legal pads penned with what he hopes will be the next great American Novel, and spends the waning days of the Carter administration at Yankee Stadium, waxing poetic while slinging peanuts to pay the rent.

When Ted hears the news that his estranged father, Marty, is dying of lung cancer, he immediately moves back into his childhood home, where a whirlwind of revelations ensues. The browbeating absentee father of Ted’s youth tries to make up for lost time, but his health dips drastically whenever his beloved Red Sox lose. And so, with help from Mariana—the Nuyorican grief counselor with whom Ted promptly falls in love—and a crew of neighborhood old-timers, Ted orchestrates the illusion of a Boston winning streak, enabling Marty and the Red Sox to reverse the Curse of the Bambino and cruise their way to World Series victory. Well, sort of.

David Duchovny’s richly drawn Bucky F*cking Dent explores the bonds between fathers and sons and the age-old rivalry between Yankee fans and the Fenway faithful, and grapples with our urgent need to persevere—and risk everything—in the name of love. Culminating in that fateful moment in October of ’78 when the mighty Bucky Dent hit his way into baseball history with the unlikeliest of home runs, this tender, insightful, and hilarious novel demonstrates how life truly belongs to the losers, and that the long shots are the ones worth betting on.

Bucky F*cking Dent is a singular tale that brims with the mirth, poignancy, and profound solitude of modern life.

David Duchovny is a television, stage, and screen actor, as well as a screenwriter and director.

“Hilarious and deeply touching . . . Not a baseball book any more than Field of Dreams is a baseball book, this moving, beautiful novel resonates with laughter and tears throughout.” —Don Oldenburg, USA Today

“If it’s annoying that Mr. Duchovny, who’s already a phenomenally successful and painfully good-looking actor is also a funny and natural writer—his last book, the animal allegory Holy Cow, also earned high praise from skeptical critics—then at least give him some points for self-awareness. Like his character in Californication, Mr. Duchovny knows how he comes off and doesn’t mind if you resent him. He just wants a fair shake . . . Mr. Duchovny spoke to the Observer about writing, acting and the shocking demise of the wondrous Garry Shandling.” —Ken Kurson, NY Observer

“Duchovny has hit this one out of the park . . . he does a terrific job of blending quirky and emotional writing.” —The Associated Press

“Duchovny’s hilarious new novel hits a home run . . . As fast as it is entertaining . . . Duchovny has a place in the lineup, kind of like a light-hitting shortstop who shines in key moments.” —Micah Pollack, The Washington Post

“Even people who hate the Red Sox will love this book. David Duchovny knows his baseball, but more important, he loves his fathers and sons. A touching delight.” —Gary Shteyngart