Theatre Of Marvels: A Novel 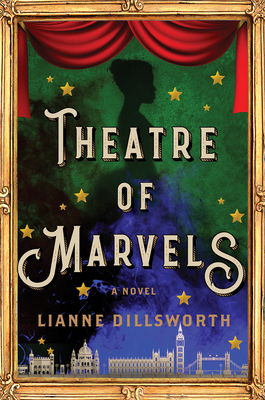 Theatre Of Marvels: A Novel

By  Lianne Dillsworth
Hardcover
$ 27.99
Out of Stock In Store (Available to Order)

Behind the spectacle, there are always secrets.

Unruly crowds descend on Crillick’s Variety Theatre. The young, mixed-race actress Zillah is headlining tonight as “The Great Amazonia, a Savage Queen from Darkest Africa.” Zillah, an orphan from the slums of Victorian London, knows that her rise to stardom is her ticket to freedom and, she hopes, to high society. The absurd caricature of her role, along with the leers of the drunken audience, are simply the price she’s willing to pay.

Zillah’s late mother made her promise to make a better life for herself, and now she’s on the verge of attaining everything she’s ever dreamed of. But when Crillick’s newest Black actress suddenly disappears, Zillah is haunted by worry—can she risk her own neck to save this troubled stranger?

A reckless pursuit of the truth takes Zillah into the underbelly of the city—from gaslit streets to the sumptuous parlors of Mayfair—as she seeks help from both rich admirers of the Great Amazonia and notorious criminals from her past, and where she will quickly find herself torn between two powerful worlds.

A stunning and deliciously immersive debut, Lianne Dillsworth’s Theatre of Marvels is a riveting journey across Victorian London and an unforgettable tale of race, identity and a woman’s reclamation of her fate.

In 2018, LIANNE DILLSWORTH graduated from Royal Holloway with an MA in creative writing with distinction, and in 2019, she won a place on the London Library Emerging Writers Programme. Most recently she was awarded a bursary place for underrepresented writers on the Jericho Writers Self-Editing course and short-listed for the SI Leeds Literary Prize. She also holds an MA in Victorian studies, and her love for the period shines through her writing. She currently lives in London, where she works for the government on growing diversity within the Civil Service.