Chronic: The Hidden Cause of the Autoimmune Pandemic and How to Get Healthy Again (Hardcover) 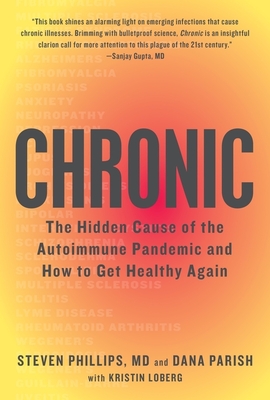 By Steven Phillips, Dana Parish
$28.00
PRE-ORDER (NOT YET AVAILABLE)

Millions of people worldwide suffer from autoimmune disease and chronic illness. What is fueling this 21st-century pandemic?

In this eye-opening book, Steven Phillips, MD, and his former patient, singer-songwriter Dana Parish, reveal striking evidence that a broad range of microbes, including the Lyme bacterium, cause a variety of recurrent conditions and autoimmune diseases. Chronic explores the science behind common infections that are difficult to diagnose and treat, debunks widely held beliefs by doctors and patients alike, and provides solutions that empower sufferers to reclaim their lives.

Dr. Phillips was already an internationally renowned physician specializing in complex chronic diseases when he became a patient himself. After nearly dying from his own mystery illness, he experienced firsthand the medical community’s ignorance about the pathogens that underlie a deep spectrum of serious conditions—from Lyme disease, fibromyalgia, lupus, multiple sclerosis, chronic fatigue syndrome, and rheumatoid arthritis to depression, anxiety, and neurodegenerative disorders. Parish, too, watched her health spiral after twelve top doctors missed an underlying infection that caused heart failure and other sudden debilitating physical and psychiatric symptoms. Now, they’ve come together with a mission: to change the current model of simply treating symptoms—often with dangerous, lifelong drugs­—and shift the focus to finding and curing root causes of chronic diseases that affect millions around the world.

Steven Phillips, MD, is a renowned, Yale-trained physician and researcher who lectures internationally. He regularly appears in the media as an expert on Lyme and other chronic infections. In private practice since 1996, he has treated over 20,000 patients from nearly twenty countries. His practice is located in Wilton, Connecticut.

Dana Parish developed Lyme-induced heart failure as a result of being improperly diagnosed by some of the best doctors in the country—and had her life saved by Dr. Phillips. An award-winning singer/songwriter for Sony/ATV, she has become a powerful voice for change in the field of Lyme disease. She lives in New York City.