The First Salute: A View of the American Revolution 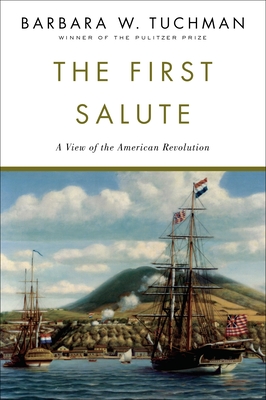 The First Salute: A View of the American Revolution

Barbara W. Tuchman, the Pulitzer Prize–winning author of the classic The Guns of August, turns her sights homeward with this brilliant, insightful narrative of the Revolutionary War.

In The First Salute, one of America’s consummate historians crafts a rigorously original view of the American Revolution. Barbara W. Tuchman places the Revolution in the context of the centuries-long conflicts between England and both France and Holland, demonstrating how the aid to the American colonies of both these nations made the triumph of independence possible. She sheds new light on the key role played by the contending navies, paints a magnificent portrait of George Washington, and recounts in riveting detail the decisive campaign of the war at Yorktown. By turns lyrical and gripping, The First Salute is an exhilarating account of the birth of a nation.

Praise for The First Salute

“Nothing in a novel could be more thrilling than the moment in this glorious history when French soldiers arrive [to] see a tall, familiar figure: George Washington. . . . It is only part of Tuchman’s genius that she can reconstitute such scenes with so much precision and passion.”—People

“Tuchman writes narrative history in the great tradition. . . . A persuasive book, which brings us entertaining pictures, scenes and characters.”—Chicago Tribune

Barbara W. Tuchman (1912–1989) achieved prominence as a historian with The Zimmermann Telegram and international fame with The Guns of August—a huge bestseller and winner of the Pulitzer Prize. Her other works include Bible and Sword, The Proud Tower, Stilwell and the American Experience in China (for which Tuchman was awarded a second Pulitzer Prize), Notes from China, A Distant Mirror, Practicing History, The March of Folly, and The First Salute.