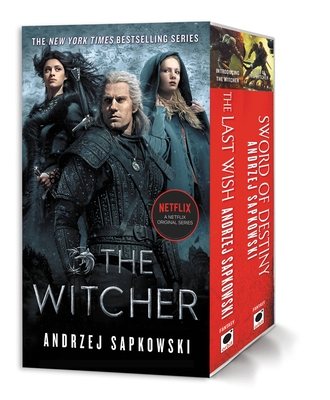 NOW A NETFLIX ORIGINAL SERIES
Andrzej Sapkowski created an international phenomenon with his New York Times bestselling epic fantasy saga, The Witcher. This special boxed set includes The Last Wish and Sword of Destiny, the two books that inspired season one of the hit Netflix series. Geralt is a Witcher, a man whose magic powers, enhanced by long training and a mysterious elixir, have made him a brilliant fighter and a merciless assassin. Yet he is no ordinary murderer: his targets are the multifarious monsters and vile fiends that ravage the land and attack the innocent. Follow Geralt as he battles monsters, demons and prejudices alike in these two bestselling collections of unmissable tales. Witcher collectionsThe Last WishSword of Destiny Witcher novelsBlood of ElvesThe Time of ContemptBaptism of FireThe Tower of SwallowsLady of the LakeSeason of Storms

Hussite trilogy
The Tower of Fools The Malady and Other Stories: An Andrzej Sapkowski Sampler (e-only) Translated from original Polish by Danusia Stok and David French