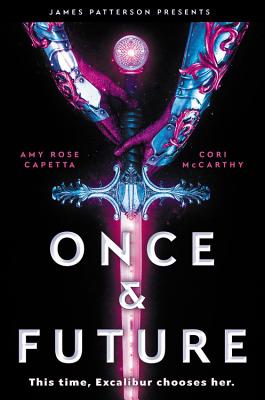 King Arthur as you've never seen her! This bold, sizzling YA novel reimagines the Once and Future King as a teenage girl determined to save the universe from an evil curse.
My name is Ari Helix. I have a magic sword, a cranky wizard, and a revolution to start.
I've been chased my whole life. As a fugitive refugee in the territory controlled by the tyrannical Mercer corporation, I've always had to hide who I am. Until I found Excalibur. Now I'm done hiding.
When Ari crash-lands on Old Earth and pulls a magic sword from its ancient resting place, she is revealed to be the newest reincarnation of King Arthur. Then she meets Merlin, who has aged backward over the centuries into a teenager, and together they must break the curse that keeps Arthur coming back. Their quest? Defeat the cruel, oppressive government and bring peace and equality to all humankind. No pressure.
"All hail this worthier-than-ever, fresh, and affirming reincarnation of the legendary king and her round table of knights which dazzles with heroic flair, humor, and suspense." -- Kirkus, Starred Review

Cory McCarthy (they/he) and A. R. Capetta (all pronouns) are the acclaimed bestselling authors of books for young people. Highlights include: the coauthored Once & Future, an ALA Rainbow List selection and finalist for the New England Book Award; A. R.’s queer genre titles Echo After Echo, The Lost Coast, and The Brilliant Death duology; Cory’s cinematic novels Breaking Sky, Now a Major Motion Picture, and You Were Here. The coauthors met while earning MFAs at Vermont College of Fine Arts, and soon after fell in love. During the release party for Once & Future at their local indie bookstore, they became engaged and were married shortly thereafter. They are riotously happy.