The Magic Misfits: The Minor Third 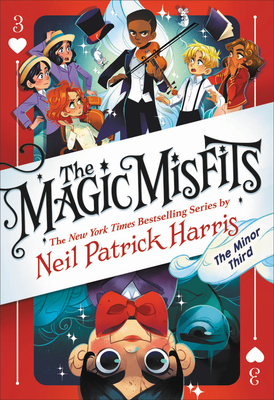 The Magic Misfits: The Minor Third

By  Neil Patrick Harris
Paperback
$ 7.99
Out of Stock In Store (Available to Order)

The Magic Misfits must stop the latest member of the Emerald Ring in the third magical book of Neil Patrick Harris's #1 New York Times bestselling series filled with fun and friendship!
Theo Stein-Meyer loves being part of the Magic Misfits. Armed with his trusty violin bow, he completes the team with his levitation skills, unflappable calm, and proper manners. But when a girl named Emily begins to spend time with the group and the other Misfits grow suspicious, Theo is surprisingly drawn to her. She seems to understand the pull he feels between music and magic, family and friends.
Then a famous ventriloquist arrives in town, and the Misfits are sure he (and his creepy dummy Daniel) are up to no good. With their mentor, Mr. Vernon, suddenly called away and tension simmering among the friends, will they be able to come together to stop this newest member of the mysterious Emerald Ring? It's time for Theo to make a choice about where -- and with whom -- he belongs.
Join the Magic Misfits as they discover adventure, friendship, and more than a few hidden secrets in this unique and surprising series. Whether you're a long-time expert at illusion or simply a new fan of stage magic, hold on to your top hat!

Neil Patrick Harris is an accomplished actor, producer, director, host, author, husband, and father of magical twins. Harris also served as President of the Academy of Magical Arts from 2011-2014. His memoir, Choose Your Own Autobiography, was a New York Times bestseller. The New York Times bestsellingMagic Misfitsseries is his middle grade debut.