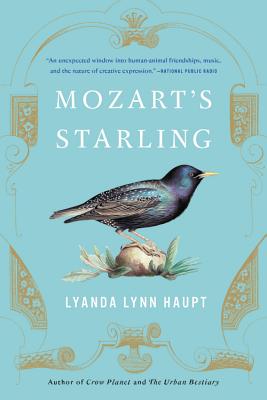 By  Lyanda Lynn Haupt
Also available bargain edition
$ 17.99
Out of Stock In Store (Available to Order)

On May 27th, 1784, Wolfgang Amadeus Mozart met a flirtatious little starling in a Viennese shop who sang an improvised version of the theme from his Piano Concerto no. 17 in G major. Sensing a kindred spirit in the plucky young bird, Mozart bought him and took him home to be a family pet. For three years, the starling lived with Mozart, influencing his work and serving as his companion, distraction, consolation, and muse.

Two centuries later, starlings are reviled by even the most compassionate conservationists. A nonnative, invasive species, they invade sensitive habitats, outcompete local birds for nest sites and food, and decimate crops. A seasoned birder and naturalist, Lyanda Lynn Haupt is well versed in the difficult and often strained relationships these birds have with other species and the environment. But after rescuing a baby starling of her own, Haupt found herself enchanted by the same intelligence and playful spirit that had so charmed her favorite composer.

In Mozart's Starling, Haupt explores the unlikely and remarkable bond between one of history's most cherished composers and one of earth's most common birds. The intertwined stories of Mozart's beloved pet and Haupt's own starling provide an unexpected window into human-animal friendships, music, the secret world of starlings, and the nature of creative inspiration. A blend of natural history, biography, and memoir, Mozart's Starling is a tour de force that awakens a surprising new awareness of our place in the world.

Lyanda Lynn Haupt has created and directed educational programs for Seattle Audubon, worked in raptor rehabilitation in Vermont, and as a seabird researcher for the Fish and Wildlife Service in the remote tropical Pacific. She is the author of Pilgrim on the Great Bird Continent and Rare Encounters with Ordinary Birds (winner of the 2002 Washington State Book Award).

Her writing has appeared in Image, Open Spaces, Wild Earth, Conservation Biology Journal, Birdwatcher's Digest, and the Prairie Naturalist. She lives in West Seattle with her husband and daughter.