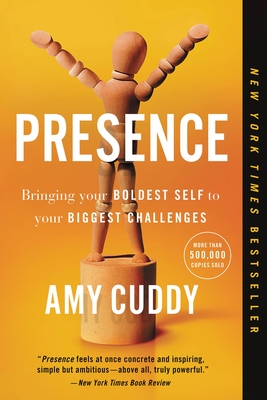 MORE THAN HALF A MILLION COPIES SOLD: Learn the simple techniques you'll need to approach your biggest challenges with confidence.

Have you ever left a nerve-racking challenge and immediately wished for a do over? Maybe after a job interview, a performance, or a difficult conversation? The very moments that require us to be genuine and commanding can instead cause us to feel phony and powerless. Too often we approach our lives' biggest hurdles with dread, execute them with anxiety, and leave them with regret.

By accessing our personal power, we can achieve "presence," the state in which we stop worrying about the impression we're making on others and instead adjust the impression we've been making on ourselves. As Harvard professor Amy Cuddy's revolutionary book reveals, we don't need to embark on a grand spiritual quest or complete an inner transformation to harness the power of presence. Instead, we need to nudge ourselves, moment by moment, by tweaking our body language, behavior, and mind-set in our day-to-day lives.

Amy Cuddy has galvanized tens of millions of viewers around the world with her TED talk about "power poses." Now she presents the enthralling science underlying these and many other fascinating body-mind effects, and teaches us how to use simple techniques to liberate ourselves from fear in high-pressure moments, perform at our best, and connect with and empower others to do the same.

Brilliantly researched, impassioned, and accessible, Presence is filled with stories of individuals who learned how to flourish during the stressful moments that once terrified them. Every reader will learn how to approach their biggest challenges with confidence instead of dread, and to leave them with satisfaction instead of regret.

"Presence feels at once concrete and inspiring, simple but ambitious — above all, truly powerful." —New York Times Book Review

Amy Cuddy is a Harvard Business School professor and social psychologist who studies how nonverbal behavior and snap judgments influence people. Her research has been published in top academic journals and covered by NPR, the New York Times, the Wall Street Journal, The Economist, Wired, Fast Company, and more. Cuddy has been named a Game Changer by TIME, a Rising Star by the Association for Psychological Science, one of 50 Women Who Are Changing the World by Business Insider, and a Young Global Leader by the World Economic Forum. Her 2012 Ted Talk is the second most-viewed talk in TED's history.