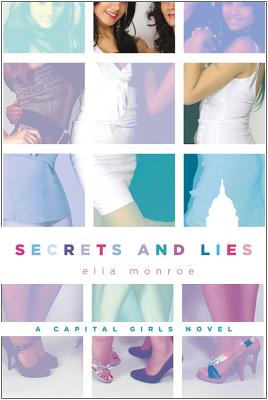 Jealousy, rivalry, and dark secrets threaten to tear the girls apart in this sizzling follow-up to Capital Girls: Secrets and Lies by Ella Monroe

It's the start of senior year, and Excelsior Prep is on Code 3 lockdown. Secret Service agents swarm the halls searching for the First Son's girlfriend, Jackie Whitman. Outside a SWAT team hunts for the man who's been threatening the First Family for weeks. Only this time he's singled out Jackie, leaving a menacing message on the school's voicemail. Jackie's safe for now, but for the Capital Girls—three privileged kids who live in a political fishbowl in the nation's capital—every day is filled with tension and thrills. Though, even for them, a raid on the school by AK-47-toting marksmen is a standout.

And a stalker isn't Jackie's only problem. Still shattered by the shocking news that Andrew cheated on her with Taylor the night Taylor died, Jackie's whole world has fallen apart. Not only did the love of her life betray her, so did her best friend and idol. What made Taylor do it? Who was she really? On top of it all, Whiteny Remick is plotting to take Taylor's place, and Jackie will do anything to stop her.

“Great characters, full of rivalry, jealousy and secrets, make this a novel not to miss.” - RT Book Reviews

ELLA MONROE is the pseudonym for the Washington, DC based, debut writing duo Marilyn Rauber and Amy Reingold. Maz Rauber is a former reporter who covered national politics—and all its scandals—for the New York Post. The Australian-born writer lives in the DC area with her husband and, on occasion, their two college-aged children. Amy Reingold is a writer, a textile artist, and a classically-trained Cordon Bleu chef. Raised in small-town Illinois, she has lived in London and Hong Kong. But her favorite by far is the nation’s capital, where she and her husband have raised two daughters and assorted pets.