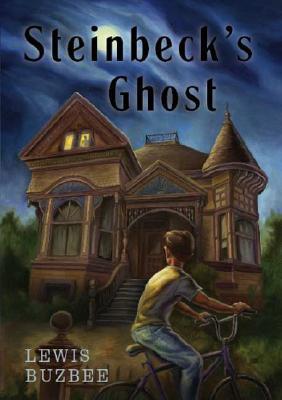 It’s been two months since Travis’s family moved to a development so new that it seems totally unreal. His parents are working harder now, to pay for it all, and Travis is left to fend for himself.

There’s one place, though, where Travis can still connect with his old life: the Salinas library. Travis and his family used to go there together every Saturday, but now he bikes to it alone, re-reading his favorite books.

It’s only natural that Travis likes the work of author John Steinbeck—after all, Salinas is Steinbeck’s hometown. But that can’t explain why Travis is suddenly seeing Steinbeck’s characters spring to life. There’s the homeless man in the alley behind the library, the line of figures at the top of a nearby ridge, the boy who writes by night in an attic bedroom. Travis has met them all before—as a reader. But why are they here now? And how?

As Travis struggles to solve this mystery, budget cuts threaten his library. And so, he embarks on a journey through Steinbeck’s beautiful California landscape, looking for a way to save his safe haven. It’s only then that he begins to sort out fact from fiction, discovering the many ways a story can come alive—and stumbling into a story Steinbeck might have started, and Travis needs to complete.

Here is a mystery that delves deeply into the ways that books take us, one at a time, out into the vast world.

Lewis Buzbee is a former bookseller and sales rep (for Chronicle Books), and the author of the acclaimed adult memoir, "The Yellow-Lighted Bookshop," published by Graywolf Press in June 2006. A native Californian, he lives in San Francisco with his wife and daughter. This is his first book for children.