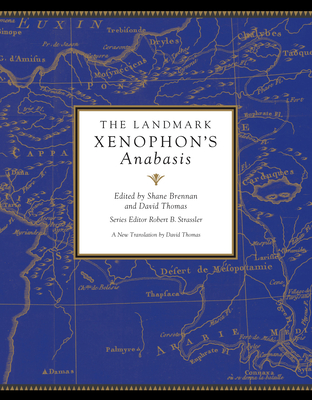 One of the greatest true-life adventure stories ever recorded, this ancient classic—also known as The March of the Ten Thousand or The March Up Country—is now brought to life in a newly translated, definitive edition that features copious illuminating annotations, maps, and illustrations

Xenophon’s Anabasis is a fascinating tale of fraught and dangerous journey, and this translation shines new light on the long-revered text. The narrative tells of ten thousand Greek soldiers stranded deep in hostile Persia, their commander dead. Xenophon was appointed as one of their leaders, and he chronicled the harrowing journey as he led the “marching republic” north to the Black Sea.

As with the other volumes in the Landmark series, this edition—edited by Shane Brennan and David Thomas—supplements the text with detailed maps and annotations that place the work in historical context. With its stunning endpapers and enlightening illustrations, this beautifully produced, large-format hardcover will make a perfect gift for history buffs and all readers of the classics.

SHANE BRENNAN is a lecturer at the American University in Dubai. He is the author of In the Tracks of the Ten Thousand: A Journey on Foot through Turkey, Syria and Iraq and coeditor of Turkey and the Politics of National Identity: Social, Economic and Cultural Transformation.

DAVID THOMAS is an unaffiliated scholar who trained in classics at the University of Oxford. He was a major contributor to The Landmark Xenophon’s Hellenika. He lives near Oxford, England.

Series editor ROBERT B. STRASSLER is an unaffiliated scholar who holds an honorary doctorate of humanities and letters from Bard College and is chairman of the Aston Magna Foundation for Music and the Humanities. He lives in Brookline, Massachusetts.