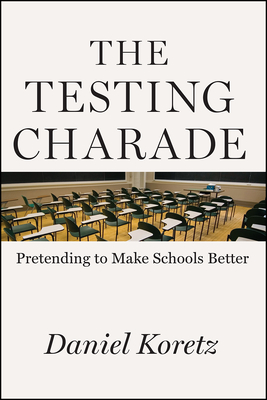 For decades we’ve been studying, experimenting with, and wrangling over different approaches to improving public education, and there’s still little consensus on what works, and what to do. The one thing people seem to agree on, however, is that schools need to be held accountable—we need to know whether what they’re doing is actually working. But what does that mean in practice?

High-stakes tests. Lots of them. And that has become a major problem. Daniel Koretz, one of the nation’s foremost experts on educational testing, argues in The Testing Charade that the whole idea of test-based accountability has failed—it has increasingly become an end in itself, harming students and corrupting the very ideals of teaching. In this powerful polemic, built on unimpeachable evidence and rooted in decades of experience with educational testing, Koretz calls out high-stakes testing as a sham, a false idol that is ripe for manipulation and shows little evidence of leading to educational improvement. Rather than setting up incentives to divert instructional time to pointless test prep, he argues, we need to measure what matters, and measure it in multiple ways—not just via standardized tests.

Right now, we’re lying to ourselves about whether our children are learning. And the longer we accept that lie, the more damage we do. It’s time to end our blind reliance on high-stakes tests. With The Testing Charade, Daniel Koretz insists that we face the facts and change course, and he gives us a blueprint for doing better.

Daniel Koretz is the Henry Lee Shattuck Professor of Education at the Harvard Graduate School of Education and the author of Measuring Up: What Educational Testing Really Tells Us.