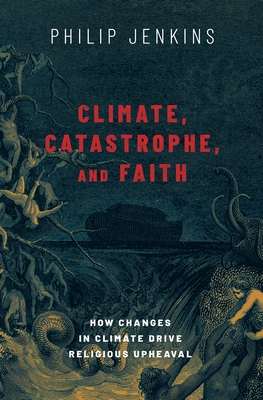 One of the world's leading scholars of religious trends shows how climate change has driven dramatic religious upheavals.

Long before the current era of man-made climate change, the world has suffered repeated, severe climate-driven shocks. These shocks have resulted in famine, disease, violence, social upheaval, and mass migration. But these shocks were also religious events. Dramatic shifts in climate have often been
understood in religious terms by the people who experienced them. They were described in the language of apocalypse, millennium, and Judgment. Often, too, the eras in which these shocks occurred have been marked by far-reaching changes in the nature of religion and spirituality. Those changes have
varied widely--from growing religious fervor and commitment; to the stirring of mystical and apocalyptic expectations; to waves of religious scapegoating and persecution; or the spawning of new religious movements and revivals. In many cases, such responses have had lasting impacts, fundamentally
reshaping particular religious traditions. In Climate, Catastrophe, and Faith historian Philip Jenkins draws out the complex relationship between religion and climate change. He asserts that the religious movements and ideas that emerge from climate shocks often last for many decades, and even become a familiar part of the religious
landscape, even though their origins in particular moments of crisis may be increasingly consigned to remote memory. By stirring conflicts and provoking persecutions that defined themselves in religious terms, changes in climate have redrawn the world's religious maps, and created the global
concentrations of believers as we know them today. This bold new argument will change the way we think about the history of religion, regardless of tradition. And it will demonstrate how our growing climate crisis will likely have a comparable religious impact across the Global South.

Philip Jenkins was educated at Cambridge University, and for many years taught at Penn State. He is presently Distinguished Professor of History at Baylor University, where his main appointment is in the Institute for Studies of Religion. The Economist magazine has called him "one of America's bestscholars of religion." He has published thirty books, which have been translated into sixteen languages.