The Story of Earth: The First 4.5 Billion Years, from Stardust to Living Planet 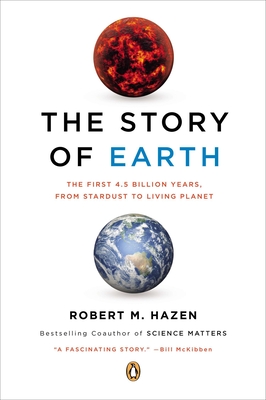 The Story of Earth: The First 4.5 Billion Years, from Stardust to Living Planet

By  Robert M. Hazen
Paperback
$ 18.00
Out of Stock In Store (Available to Order)

Hailed by The New York Times for writing “with wonderful clarity about science . . . that effortlessly teaches as it zips along,” nationally bestselling author Robert M. Hazen offers a radical new approach to Earth history in this intertwined tale of the planet’s living and nonliving spheres. With an astrobiologist’s imagination, a historian’s perspective, and a naturalist’s eye, Hazen calls upon twenty-first-century discoveries that have revolutionized geology and enabled scientists to envision Earth’s many iterations in vivid detail—from the mile-high lava tides of its infancy to the early organisms responsible for more than two-thirds of the mineral varieties beneath our feet. Lucid, controversial, and on the cutting edge of its field, The Story of Earth is popular science of the highest order.

"A sweeping rip-roaring yarn of immense scope, from the birth of the elements in the stars to meditations on the future habitability of our world." -Science

Robert M. Hazen is the Clarence Robinson professor of earth science at George Mason University and a senior scientist at the Carnegie Institution’s Geophysical Laboratory. The author of numerous books—including the bestselling Science Matters—he lives in Glen Echo, Maryland.