Garlic and Sapphires: The Secret Life of a Critic in Disguise 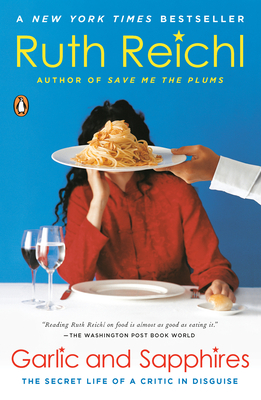 Garlic and Sapphires: The Secret Life of a Critic in Disguise

Author of Save Me the Plums Ruth Reichl’s iconic, bestselling memoir of her time as an undercover restaurant critic for The New York Times

Ruth Reichl, world-renowned food critic and former editor in chief of Gourmet magazine, knows a thing or two about food. She also knows that as the most important food critic in the country, you need to be anonymous when reviewing some of the most high-profile establishments in the biggest restaurant town in the world—a charge she took very seriously, taking on the guise of a series of eccentric personalities. In Garlic and Sapphires, Reichl reveals the comic absurdity, artifice, and excellence to be found in the sumptuously appointed stages of the epicurean world and gives us—along with some of her favorite recipes and reviews—her remarkable reflections on how one’s outer appearance can influence one’s inner character, expectations, and appetites, not to mention the quality of service one receives.

Ruth Reichl is the bestselling author of the memoirs Tender at the Bone, Comfort Me with Apples, Garlic and Sapphires, and For You, Mom, Finally; the novel Delicious!; and, most recently, the cookbook My Kitchen Year. She was editor in chief of Gourmet magazine for ten years. Previously she was the restaurant critic for The New York Times and served as the food editor and restaurant critic for the Los Angeles Times. She has been honored with six James Beard Awards for her journalism, magazine feature writing, and criticism. She lives in upstate New York with her husband and two cats.