Public Enemies: America's Greatest Crime Wave and the Birth of the FBI, 1933-34 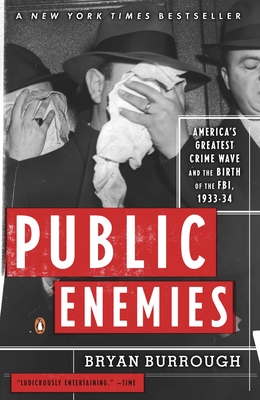 Public Enemies: America's Greatest Crime Wave and the Birth of the FBI, 1933-34

By  Bryan Burrough
Paperback
$ 20.00
Out of Stock In Store (Click to Order)

In Public Enemies, bestselling author Bryan Burrough strips away the thick layer of myths put out by J. Edgar Hoover’s FBI to tell the full story—for the first time—of the most spectacular crime wave in American history, the two-year battle between the young Hoover and the assortment of criminals who became national icons: John Dillinger, Machine Gun Kelly, Bonnie and Clyde, Baby Face Nelson, Pretty Boy Floyd, and the Barkers. In an epic feat of storytelling and drawing on a remarkable amount of newly available material on all the major figures involved, Burrough reveals a web of interconnections within the vast American underworld and demonstrates how Hoover’s G-men overcame their early fumbles to secure the FBI’s rise to power.

Bryan Burrough is a special correspondent at Vanity Fair and the author of three previous books. A former reporter for the Wall Street Journal, he is a three-time winner of the John Hancock Award for excellence in financial journalism. Burrough lives in Summit, New Jersey, with his wife and their two sons.