The Case of the Left-Handed Lady: An Enola Holmes Mystery 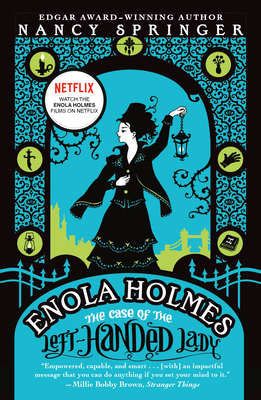 The Case of the Left-Handed Lady: An Enola Holmes Mystery

By  Nancy Springer
Paperback
$ 7.99
On Our Shelves Now

Enola Holmes--younger sister to Sherlock Holmes--is back on another case!

Enola Holmes is being hunted by the world's most famous detective--her own brother, Sherlock Holmes. But while she is on the run in the world's biggest, darkest, dirtiest city, she discovers a hidden cache of charcoal drawings and feels as if she is a soul mate to the girl who drew them. But that girl, Lady Cecily, has disappeared without a trace. Braving the midnight streets, Enola must unravel the clues to find this left-handed lady, but in order to save her, Enola risks revealing more than she should. Will she be able to keep her identity a secret and find Lady Cecily, or will the one thing she is trying to save--her freedom--be lost forever?

Praise for Enola Holmes: The Case of the Missing Marquess:

"Empowered, capable, and smart . . . [with] an impactful message that you can do anything if you set your mind to it."--Millie Bobby Brown, Stranger Things

* "This is a terrific package. Springer not only provides two fine mysteries, breathtaking adventure, and key-eyed description, but she also offers a worthy heroine." --Booklist, starred review

Nancy Springer has published forty novels for adults, young adults and children. In a career beginning shortly after she graduated from Gettysburg College in 1970, Springer wrote for ten years in the imaginary realms of mythological fantasy, then ventured on contemporary fantasy, magical realism, and women's fiction before turning her attention to children's literature. Her novels and stories for middle-grade and young adults range from contemporary realism, mystery/crime, and fantasy to her critically acclaimed novels based on the Arthurian mythos, I AM MORDRED: A TALE OF CAMELOT and I AM MORGAN LE FAY. Springer's children's books have won her two Edgar Allan Poe awards, a Carolyn W. Field award, various Children's Choice honors and numerous ALA Best Book listings. Her most recent series include the Tales of Rowan Hood, featuring Robin Hood’s daughter, and the Enola Holmes mysteries, starring the much younger sister of Sherlock Holmes.