In the Land of Milk and Honey 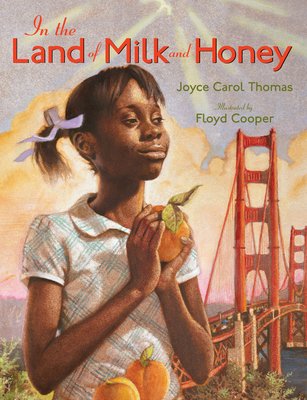 In the Land of Milk and Honey

By  Joyce Carol Thomas , Illustrated By  Floyd Cooper
Paperback
$ 7.99
Likely On Our Shelves

Lemons as big as oranges, the cool Pacific Ocean, mountains that rise up beyond the outstretched bay—California beckons as one girl makes her way west on a journey filled with excitement, hope, and the promise of a place where people from all paths come together and music fills the air.

This is the true story of author Joyce Carol Thomas's trip from Oklahoma to California in 1948, when she moved there as a girl. During that time, many people went west, drawn by warmth and possibility, reflected in the people of all cultures and ethnicities who started a new life there.

I ease myself back in the window seat

as the train breathes out

We're on our way!

to the Land of Milk and Honey

Joyce Carol Thomas is an internationally renowned author who received the National Book Award for her first novel, Marked By Fire, and a Coretta Scott King Honor for The Blacker the Berry and for her first picture book, Brown Honey in Broomwheat Tea. Her picture book I Have Heard of a Land received a Coretta Scott King Honor and an IRA/CBC Teachers' Choice Award and was an ALA Notable Book. Her other titles include The Gospel Cinderella, Crowning Glory, Gingerbread Days, and A Gathering of Flowers. Ms. Thomas lives in Berkeley, California.

Floyd Cooper received a Coretta Scott King Award for his illustrations in The Blacker the Berry and a Coretta Scott King Honor for Brown Honey in Broomwheat Tea and I Have Heard of a Land. Born and raised in Tulsa, Oklahoma, Mr. Cooper received a degree in fine arts from the University of Oklahoma and, after graduating, worked as an artist for a major greeting card company. His many beloved books form a lasting legacy.