The Further Observations of Lady Whistledown 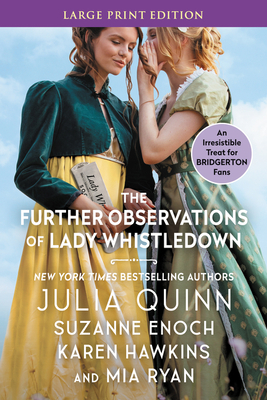 The Further Observations of Lady Whistledown

Society is abuzz when the Season’s most promising debutante is jilted by her intended—only to be swept away by the deceitful rogue’s dashing old brother—in New York Times bestseller Julia Quinn’s witty, charming, and heartfelt tale.

When the scandalous actions of his beautiful fiancée are recorded in Lady Whistledown’s column, a concerned groom-to-be rushes back to London to win his lady’s heart once and forever, in Suzanne Enoch’s enchanting romantic gem.

Karen Hawkins captivates with an enduring story of a handsome rogue whose lifelong friendship—and his heart—are tested when the lovely lady in question sets her cap for someone else.

A dazzling and delightful tale by Mia Ryan has a young woman cast out of her home by an insufferable yet charming marquis—who intends to take possession not only of the house . . . but its former occupant as well!