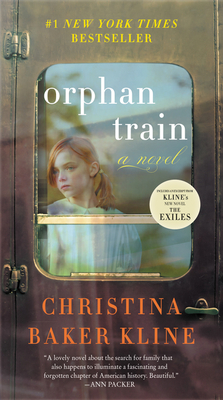 “A lovely novel about the search for family that also happens to illuminate a fascinating and forgotten chapter of America’s history. Beautiful.”—Ann Packer

Moving between contemporary Maine and Depression-era Minnesota, Orphan Train is a powerful novel of upheaval and resilience, of second chances, and unexpected friendship.

Seventeen-year-old Molly Ayer knows that a community service position helping an elderly woman clean out her home is the only thing keeping her out of juvenile hall. But as Molly helps Vivian sort through her keepsakes and possessions, she discovers that she and Vivian aren't as different as they appear. A Penobscot Indian who has spent her youth in and out of foster homes, Molly is also an outsider being raised by strangers, and she, too, has unanswered questions about the past.

Christina Baker Kline is the author of six novels, including the #1 New York Times bestseller Orphan Train as well as A Piece of the World. She lives outside New York City and spends as much time as possible on the coast of Maine. Learn more about Christina at www.christinabakerkline.com.