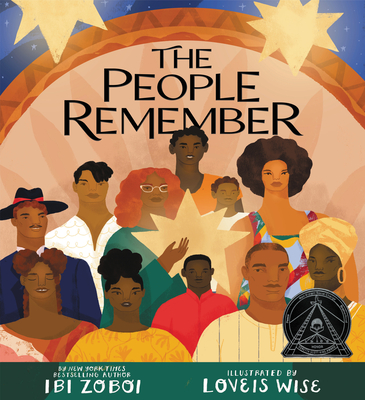 From award-winning, New York Times bestselling author Ibi Zoboi comes her debut picture book—a tour de force that uses the principles of Kwanzaa to talk about the history of African Americans. This lyrical, powerful tribute is sumptuously illustrated by New Yorker artist and rising star Loveis Wise. A beautiful gift for readers of all ages and for fans of Kadir Nelson’s Heart and Soul. A Coretta Scott King Honor Book!

The People Remember tells the journey of African descendants in America by connecting their history to the seven principles of Kwanzaa. It begins in Africa, where people were taken from their homes and families. They spoke different languages and had different customs.

Yet they were bound and chained together and forced onto ships sailing into an unknown future. Ultimately, all these people had to learn one common language and create a culture that combined their memories of home with new traditions that enabled them to thrive in this new land.

Sumptuously illustrated, this is an important book to read as a family—a story young readers can visit over and over again to deepen their understanding of African American history in relation to their own lives and current social justice movements. By turns powerful and revealing, this is a lyrical narrative that tells the story of survival, as well as the many moments of joy, celebration, and innovation of Black people in America.

Ibi Zoboi holds an MFA from Vermont College of Fine Arts. Her novel American Street was a National Book Award finalist and a New York Times Notable Book. She is also the author of Pride and My Life as an Ice Cream Sandwich, a New York Times bestseller. She is the editor of the anthology Black Enough. Born in Haiti and raised in New York City, she now lives in New Jersey with her husband and their three children. You can find her online at www.ibizoboi.net.

Loveis Wise is an illustrator and designer from Washington, DC. They are currently based in Los Angeles and their work often speaks to themes of joy and liberation. Their work can be found through the New Yorker, Google, Adobe, and the New York Times. You can find them online at www.loveiswise.com.