Koshersoul: The Faith and Food Journey of an African American Jew 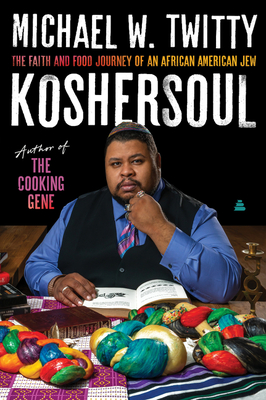 Koshersoul: The Faith and Food Journey of an African American Jew

By  Michael W. Twitty
Hardcover
$ 28.99
Likely On Our Shelves

“Twitty makes the case that Blackness and Judaism coexist in beautiful harmony, and this is manifested in the foods and traditions from both cultures that Black Jews incorporate into their daily lives…Twitty wishes to start a conversation where people celebrate their differences and embrace commonalities. By drawing on personal narratives, his own and others’, and exploring different cultures, Twitty’s book offers important insight into the journeys of Black Jews.”—Library Journal

The James Beard award-winning author of the acclaimed The Cooking Gene explores the cultural crossroads of Jewish and African diaspora cuisine and issues of memory, identity, and food.

In Koshersoul, Michael W. Twitty considers the marriage of two of the most distinctive culinary cultures in the world today: the foods and traditions of the African Atlantic and the global Jewish diaspora. To Twitty, the creation of African-Jewish cooking is a conversation of migrations and a dialogue of diasporas offering a rich background for inventive recipes and the people who create them.

The question that most intrigues him is not just who makes the food, but how the food makes the people. Jews of Color are not outliers, Twitty contends, but significant and meaningful cultural creators in both Black and Jewish civilizations. Koshersoul also explores how food has shaped the journeys of numerous cooks, including Twitty’s own passage to and within Judaism.

As intimate, thought-provoking, and profound as The Cooking Gene, this remarkable book teases the senses as it offers sustenance for the soul.

Michael W. Twitty is a noted culinary and cultural historian and the creator of Afroculinaria, the first blog devoted to African American historic foodways and their legacies. He has been honored by FirstWeFeast.com as one of the twenty greatest food bloggers of all time, and named one of the “Fifty People Who Are Changing the South” by Southern Living and one of the “Five Cheftavists to Watch” by TakePart.com. Twitty has appeared throughout the media, including on NPR’s The Splendid Table, and has given more than 250 talks in the United States and abroad. His work has appeared in Ebony, the Guardian, and on NPR.org. He is also a Smith fellow with the Southern Foodways Alliance, a TED fellow and speaker, and the first Revolutionary in Residence at the Colonial Williamsburg Foundation. Twitty lives in Silver Spring, Maryland.