The World Between Blinks #1 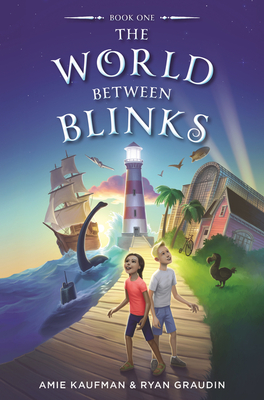 The World Between Blinks #1

Bestselling authors Amie Kaufman and Ryan Graudin invite readers into a wondrous world where lost things are found, and where two cousins must come face-to-face with the impossible…

Whenever Jake and Marisol get together, adventure follows. They have their late Nana to thank for that. Her epic trips and treasure hunts were legendary.

With the whole family reuniting for one last summer vacation at Nana’s home, the cousins are prepared for an extraordinary trip of their own. Following a map Nana left behind, Jake and Marisol sneak out to a nearby lighthouse—then accidentally slip into another world!

The World Between Blinks is a magical place, where all sorts of lost things and people wind up. Everywhere they turn, the cousins find real mysteries from history and a few they thought were just myths, from pilot Amelia Earhart to the fabled city of Atlantis.

But the man who holds the key to Jake and Marisol’s journey home doesn’t want to be found . . . and if the cousins don’t catch him fast, they could end up lost in this world forever.

Ryan Graudin is the award-winning author of several young adult novels, including the Carnegie nominated Wolf By Wolf duology, Invictus, and The Walled City. She resides near Charleston, South Carolina with her husband, daughter and wolf-dog. You can find her online at www.ryangraudin.com.