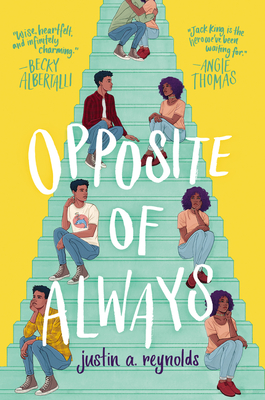 “One of the best love stories I’ve ever read.” —Angie Thomas, #1 New York Times bestselling author of The Hate U Give

“Read this one, reread it, and then hug it to your chest.”  —Becky Albertalli, #1 New York Times bestselling author of Simon vs. the Homo Sapiens Agenda

Debut author Justin A. Reynolds delivers a hilarious and heartfelt novel about the choices we make, the people we choose, and the moments that make a life worth reliving. Perfect for fans of Nicola Yoon and John Green.

When Jack and Kate meet at a party, bonding until sunrise over their mutual love of Froot Loops and their favorite flicks, Jack knows he’s falling—hard. Soon she’s meeting his best friends, Jillian and Franny, and Kate wins them over as easily as she did Jack.

But then Kate dies. And their story should end there.

Yet Kate’s death sends Jack back to the beginning, the moment they first meet, and Kate’s there again. Healthy, happy, and charming as ever. Jack isn’t sure if he’s losing his mind.

Still, if he has a chance to prevent Kate’s death, he’ll take it. Even if that means believing in time travel. However, Jack will learn that his actions are not without consequences. And when one choice turns deadly for someone else close to him, he has to figure out what he’s willing to do to save the people he loves.

Justin A. Reynolds has always wanted to be a writer. Opposite of Always, his debut novel, was an Indies Introduce selection and a School Library Journal Best Book, has been translated into seventeen languages, and is being developed for film with Paramount Players. He lives in northeast Ohio with his family. You can find him at www.justinareynolds.com.

More by Justin A. Reynolds