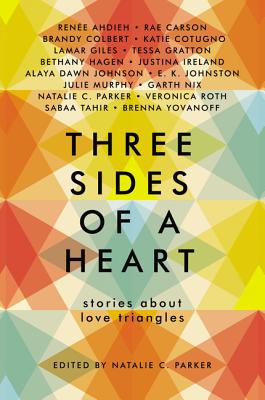 A teen girl who offers kissing lessons. Zombies in the Civil War South. The girl next door, the boy who loves her, and the girl who loves them both. Vampires at a boarding school. Three teens fighting monsters in an abandoned video rental store. Literally the last three people on the planet.

What do all these stories have in common?

These top YA authors tackle the much-debated trope of the love triangle, and the result is sixteen fresh, diverse, and romantic stories you don’t want to miss.

“Upends expectations and poses ‘questions about self-determination and what it means to embrace the power of choice.’” —USA Today

Natalie C. Parker is the author of Beware the Wild and Behold the Bones and the editor of Three Sides of a Heart: Stories About Love Triangles. She is also the founder of Madcap Retreats and works at her local university coordinating programs on climate science and indigenous communities. She lives on the Kansas prairie with her partner and a requisite number of beasts. Learn more about her at www.nataliecparker.com.

Rae Carson is the author of two bestselling and award-winning trilogies. Her debut, The Girl of Fire and Thorns, was named a William C. Morris Award finalist and an Andre Norton Award finalist. Walk on Earth a Stranger was longlisted for the 2015 National Book Award and won the Western Writers of America Spur Award. Her books tend to contain adventure, magic, and smart girls who make (mostly) smart choices. Originally from California, Rae Carson now lives in Arizona with her husband. www.raecarson.com

Brandy Colbert is the critically acclaimed author of the novels Pointe, The Voting Booth, Finding Yvonne, The Revolution of Birdie Randolph, The Only Black Girls in Town, and the Stonewall Award winner Little & Lion. A trained journalist, she also worked with boundary-breaking ballet dancer Misty Copeland to adapt her memoir into the bestselling book Life in Motion: Young Readers Edition. Born and raised in Springfield, Missouri, Brandy now lives and writes in Los Angeles and is on the faculty at Hamline University’s MFA program for writing for children and young adults. You can find her online at www.brandycolbert.com.

Justina Ireland is the New York Times bestselling author of Dread Nation and its sequel, Deathless Divide, as well as Vengeance Bound and Promise of Shadows. She is also one of the authors creating the next generation of Star Wars novels entitled the High Republic and is the author of the middle grade Star Wars adventures Lando’s Luck, Spark the Resistance, and A Test of Courage. She lives with her family in Maryland, where she enjoys dark chocolate and dark humor and is not too proud to admit that she’s still afraid of the dark. You can visit her online at www.justinaireland.com.

Julie Murphy lives in North Texas with her husband who loves her, her dog who adores her, and her cats who tolerate her. After several wonderful years in the library world, Julie now writes full-time. When she’s not writing or reliving her reference desk glory days, she can be found watching made-for-TV movies, hunting for the perfect slice of cheese pizza, and planning her next great travel adventure. She is also the author of the young adult novels Dumplin’ (now a film on Netflix), Puddin’, Ramona Blue, and Side Effects May Vary. You can visit Julie at www.juliemurphywrites.com.

Veronica Roth is the #1 New York Times bestselling author of Divergent, Insurgent, Allegiant, Four: A Divergent Collection, and Carve the Mark. Ms. Roth and her husband live in Chicago. You can visit her online at www.veronicarothbooks.com.