Fall of Poppies: Stories of Love and the Great War 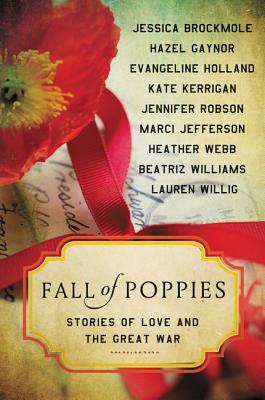 Fall of Poppies: Stories of Love and the Great War

November 11, 1918. After four long, dark years of fighting, the Great War ends at last, and the world is forever changed. For soldiers, loved ones, and survivors the years ahead stretch with new promise, even as their hearts are marked by all those who have been lost.

As families come back together, lovers reunite, and strangers take solace in each other, everyone has a story to tell.

In this moving anthology, nine authors share stories of love, strength, and renewal as hope takes root in a fall of poppies.

Hazel Gaynor is an award-winning New York Times, USA Today and international bestselling author. Her 2014 debut The Girl Who Came Home won the 2015 RNA Historical Novel of the Year award, A Memory of Violets was a 2015 WHSmith Fresh Talent pick, The Girl from The Savoy was shortlisted for the 2017 Irish Book Awards, and The Lighthouse Keeper's Daughter was shortlisted for the 2019 HWA Gold Crown Award. Last Christmas in Paris (co-written with Heather Webb) won the 2018 Women's Fiction Writers Association Star Award. Their most recent collaboration is Meet Me in Monaco. Hazel's forthcoming historical novel, When We Were Young & Brave, set in China during WW2, will be published in North America in October 2020.

Hazel was selected by Library Journal as one of Ten Big Breakout Authors for 2015. Her work has been translated into fourteen languages to date. She is co-founder of creative writing events The Inspiration Project, and lives in Ireland with her husband and two children.

Beatriz Williams is the bestselling author of eleven novels, including The Golden Hour, The Summer Wives, A Hundred Summers, and The Wicked Redhead. A native of Seattle, she graduated from Stanford University and earned an MBA in finance from Columbia University. She lives with her husband and four children near the Connecticut shore, where she divides her time between writing and laundry.

Jennifer Robson is the USA Today and #1 Toronto Globe & Mail bestselling author of Somewhere in France, After the War is Over and Moonlight Over Paris. She holds a doctorate from Saint Antony’s College, University of Oxford. She lives in Toronto with her husband and young children.

Kate Kerrigan is the author of three previous novels. She lives in Ireland with her husband and their two sons.

is the founder and editor of www.EdwardianPromenade.com, the number one blog for lovers of World War I, the Gilded Age, and Belle Époque France with nearly forty thousand unique viewers a month. In addition, she blogs at www.ModernBellesofHistory.com. Her fiction includes AN IDEAL DUCHESS and its sequel, crafted in the tradition of Edith Warton.

Lauren Willig is the New York Times and USA Today bestselling author of twenty novels, including The Summer Country, The Ashford Affair, and The English Wife, as well as the RITA Award–winning Pink Carnation series. An alumna of Yale University, she has a graduate degree in history from Harvard and a JD from Harvard Law School. She lives in New York City with her husband, kindergartner, toddler, and vast quantities of coffee.