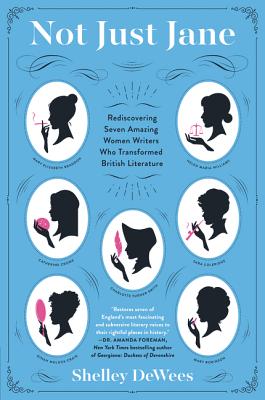 “Not Just Jane restores seven of England’s most fascinating and subversive literary voices to their rightful places in history. Shelley DeWees tells each woman writer’s story with wit, passion, and an astute understanding of the society in which she lived and wrote.”

Jane Austen and the Brontës endure as British literature’s leading ladies (and for good reason)—but were these reclusive parsons’ daughters really the only writing women of their day? A feminist history of literary Britain, this witty, fascinating nonfiction debut explores the extraordinary lives and work of seven long-forgotten authoresses, and asks: Why did their considerable fame and influence, and a vibrant culture of female creativity, fade away? And what are we missing because of it?

You’ve likely read at least one Jane Austen novel (or at least seen a film one). Chances are you’ve also read Jane Eyre; if you were an exceptionally moody teenager, you might have even read Wuthering Heights. English majors might add George Eliot or Virginia Woolf to this list…but then the trail ends. Were there truly so few women writing anything of note during late 18th and 19th century Britain?

In Not Just Jane, Shelley DeWees weaves history, biography, and critical analysis into a rip-roaring narrative of the nation’s fabulous, yet mostly forgotten, female literary heritage. As the country, and women’s roles within it, evolved, so did the publishing industry, driving legions of ladies to pick up their pens and hit the parchment. Focusing on the creative contributions and personal stories of seven astonishing women, among them pioneers of detective fiction and the modern fantasy novel, DeWees assembles a riveting, intimate, and ruthlessly unromanticized portrait of female life—and the literary landscape—during this era. In doing so, she comes closer to understanding how a society could forget so many of these women, who all enjoyed success, critical acclaim, and a fair amount of notoriety during their time, and realizes why, now more than ever, it’s vital that we remember.

Shelley DeWees has a graduate degree in ethnomusicology, several tattoos, and a documented obsession with British literature. Her writing has appeared in Austenprose, Jane Austen’s World, and Jane Austen Today, and after time spent teaching in Korea she recently moved back to Minneapolis with her husband.