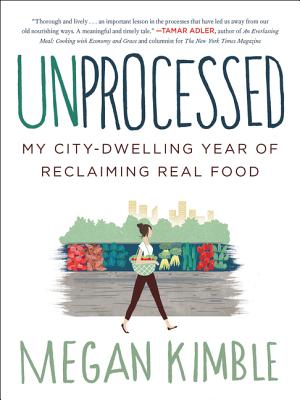 In the tradition of Michael Pollan’s bestselling In Defense of Food comes this remarkable chronicle, from a founding editor of Edible Baja Arizona, of a young woman’s year-long journey of eating only whole, unprocessed foods—intertwined with a journalistic exploration of what “unprocessed” really means, why it matters, and how to afford it.

In January of 2012, Megan Kimble was a twenty-six-year-old living in a small apartment without even a garden plot to her name. But she cared about where food came from, how it was made, and what it did to her body: so she decided to go an entire year without eating processed foods. Unprocessed is the narrative of Megan’s extraordinary year, in which she milled wheat, extracted salt from the sea, milked a goat, slaughtered a sheep, and more—all while earning an income that fell well below the federal poverty line.

What makes a food processed? As Megan would soon realize, the answer to that question went far beyond cutting out snacks and sodas, and became a fascinating journey through America’s food system, past and present. She learned how wheat became white; how fresh produce was globalized and animals industrialized. But she also discovered that in daily life, as she attempted to balance her project with a normal social life—which included dating—the question of what made a food processed was inextricably tied to gender and economy, politics and money, work and play.

Backed by extensive research and wide-ranging interviews—and including tips on how to ditch processed food and transition to a real-food lifestyle—Unprocessed offers provocative insights not only on the process of food, but also the processes that shape our habits, communities, and day-to-day lives.

Megan Kimble is a food writer living in Tucson, Arizona, where she works as the managing editor of Edible Baja Arizona, a local-foods magazine serving Tucson and the borderlands. She is a regular contributor to the Los Angeles Times and serves on the leadership council of the Pima County Food Alliance. She earned her MFA from the University of Arizona and works with the university's Southwest Center to promote food access and justice.