Her Brilliant Career: Ten Extraordinary Women of the Fifties 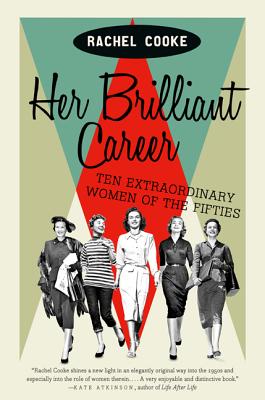 Her Brilliant Career: Ten Extraordinary Women of the Fifties

An exuberant group biography—"a splendidly various collection of 'brief lives' written with both gusto and sensitivity" (The Guardian)—that follows ten women in 1950s Britain whose pioneering lives paved the way for feminism and laid the foundation of modern women's success.

In Her Brilliant Career, Rachel Cooke goes back in time to offer an entertaining and iconoclastic look at ten women in the 1950s—pioneers whose professional careers and complicated private lives helped to create the opportunities available to today's women. These plucky and ambitious individuals—among them a film director, a cook, an architect, an editor, an archaeologist, a race car driver—left the house, discovered the bliss of work, and ushered in the era of the working woman.

Daring and independent, these remarkable unsung heroines—whose obscurity makes their accomplishments all the more astonishing and relevant —loved passionately, challenged men's control, made their own mistakes, and took life on their own terms, breaking new ground and offering inspiration. Their individual portraits gradually form a landscape of 1950s culture, and women's unique—and rapidly evolving—role.

Before there could be a Danica Patrick, there had to be a Sheila van Damm; before there was Barbara Walters, there was Nancy Spain; before there was Kathryn Bigelow, came Muriel Box. The pioneers of Her Brilliant Career forever changed the fabric of culture, society, and the work force.

This is the Fifties, retold: vivid, surprising and, most of all, modern.

Her Brilliant Career is illustrated with more than 80 black-and-white photographs.

Rachel Cooke is an award-winning journalist. She writes for The Observer and is the television critic for the New Statesman. This is her first book.