The Bible Tells Me So: Why Defending Scripture Has Made Us Unable to Read It 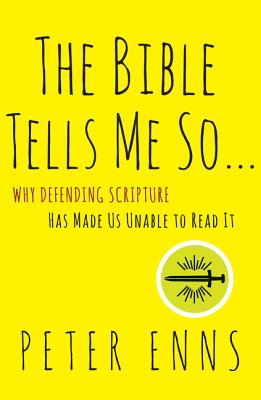 The Bible Tells Me So: Why Defending Scripture Has Made Us Unable to Read It

The controversial Bible scholar and author of The Evolution of Adam recounts his transformative spiritual journey in which he discovered a new, more honest way to love and appreciate God’s Word.

Trained as an evangelical Bible scholar, Peter Enns loved the Scriptures and shared his devotion, teaching at Westminster Theological Seminary. But the further he studied the Bible, the more he found himself confronted by questions that could neither be answered within the rigid framework of his religious instruction or accepted among the conservative evangelical community.

Rejecting the increasingly complicated intellectual games used by conservative Christians to “protect” the Bible, Enns was conflicted. Is this what God really requires? How could God’s plan for divine inspiration mean ignoring what is really written in the Bible? These questions eventually cost Enns his job—but they also opened a new spiritual path for him to follow.

The Bible Tells Me So chronicles Enns’s spiritual odyssey, how he came to see beyond restrictive doctrine and learned to embrace God’s Word as it is actually written. As he explores questions progressive evangelical readers of Scripture commonly face yet fear voicing, Enns reveals that they are the very questions that God wants us to consider—the essence of our spiritual study.

Peter Enns is the Abram S. Clemens Professor of Biblical Studies at Eastern University, St. Davids, Pennsylvania. Enns speaks at schools, churches, and seminars across the country and is a frequent contributor to journals and encyclopedias. He is the author of several books, including The Sin of Certainty, The Bible Tells Me So, Inspiration and Incarnation, and The Evolution of Adam.