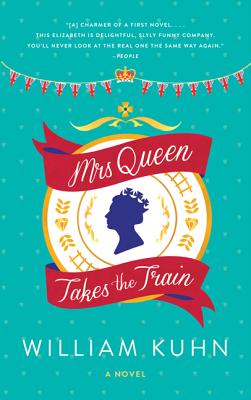 “A witty, contemporary story of the Downton Abbey-esque tensions between servants and employers, the young and the old, and tradition and modernity.” — Glamour

An absolute delight of a debut novel by William Kuhn—author of Reading Jackie: Her Autobiography in Books—Mrs Queen Takes the Train wittily imagines the kerfuffle that transpires when a bored Queen Elizabeth strolls out of the palace in search of a little fun, leaving behind a desperate team of courtiers who must find the missing Windsor before a national scandal erupts.

After decades of service and years of watching her family's troubles splashed across the tabloids, Britain's Queen is beginning to feel her age. An unexpected opportunity offers her relief: an impromptu visit to a place that holds happy memories—the former royal yacht, Britannia, now moored near Edinburgh. Hidden beneath a skull-emblazoned hoodie, the limber Elizabeth (thank goodness for yoga) walks out of Buckingham Palace and heads for King's Cross to catch a train to Scotland. But a colorful cast of royal attendants has discovered her missing. In uneasy alliance a lady-in-waiting, a butler, an equerry, a girl from the stables, a dresser, and a clerk from the shop that supplies Her Majesty's cheese set out to bring her back before her absence becomes a national scandal.

Comic and poignant, fast-paced and clever, Mrs Queen Takes the Train tweaks the pomp of the monarchy, going beneath its rigid formality to reveal the human heart of the woman at its center.

William Kuhn is a biographer and historian, and the author of Reading Jackie, Democratic Royalism, Henry & Mary Ponsonby, and The Politics of Pleasure. He lives in Boston, Massachusetts. This is his first novel. His next book, a work of historical fiction, explores the friendship over nearly forty years of Isabella Stewart Gardner and John Singer Sargent.