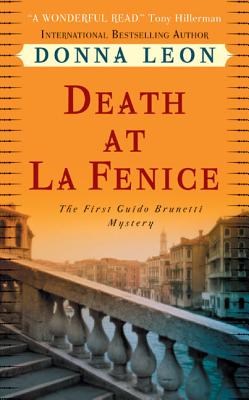 Available in paperback for the first time, the first book in the internationally bestselling Guido Brunetti detective series in which a high society murder leads the detective

Beautiful and serene Venice is a city almost devoid of crime. But that is little comfort to Maestro Helmut Wellauer, a world-renowned conductor whose intermission refreshment comes one night with a little something extra in it--cyanide. For Guido Brunetti, vice-commissario of police and genius detective, finding a suspect isn’t a problem; narrowing the large and unconventional group of enemies down to one is. As the suave and pithy Brunetti pieces together clues, a shocking picture of depravity and revenge emerges, leaving him torn between what is and what should be right--and questioning what the law can do, and what needs to be done.

Donna Leon has written four previous Guido Brunetti novels, Death and Judgment, Dressed for Death, Death in a Strange Country, and Death at La Fenice, which won the Suntory Prize for the best suspense novel of 1991. She teaches English at the University of Maryland extension at a U.S. Air Force base near Venice Italy, where she has lived for over twenty years.